I never suggested that this website had a sense of taste – and to emphatically prove this point, check out this silly, violent and really quite funny apocalyptic (the title kinda gives it away) short.

Written and Directed by Andrew Zuchero

Just a short offering today; solitude is described by a man who got a taste of the wilderness and never looked back. Quiet and alone with his thoughts, he humbly imparts chunks of knowledge we should all take seriously.

Made by Finback Films

Massive Attack music videos never fail me – always emotive, always provoking, always a little bit of violence, and always expressing the music in fascinating ways. This offering from Edouard Salier is no exception. Through the frozen midst of a godzilla-esque attack on a metropolitan area, every surface, every person, vehicle and building is fractured mirrored glass, the only natural or organic surface appearing to be the form of the giant attacking bunny – an image less comical than it is reminiscent somehow of the bloody starkness seen in the animated rendition of ‘Watership Down‘. Five views in, I’m no closer to full understanding the visuals, but it is mesmerizing in its terrible beauty. Thoughts?

A nice concept item from Erik Wernquist, using the the words and the voice of the incomparable Carl Sagan as background. We are shown a future where we resume the exploratory roles natural selection endowed upon us and move out to our neighboring planets to become not a terrestrial species, but a solar one. Graphically exciting and immersive.

“We began as wanderers, and we are wanderers still.

As a long time fan of both EveryFrameAPainting and also Jackie Chan, I couldn’t pass this up. The dissections of this talented documentarian are always enlightening and interesting. It might be said that breaking something apart and examining it is the key to destroying its anima and magic. That is true of both dissecting frogs and DVD special features, but these analyses do nothing but enhance the art and make one appreciate the work in ways one might not have previously explored. Links to Tony Zhou’s extensive Vimeo catalogue is below, and is a must for any aspiring film-maker. 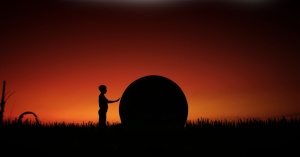 Wonderful and disturbing short film, currently making the rounds at the festivals and soaking up the well deserved awards. The escalation is artfully handled and the twists are effective; what starts as a tale of almost cliched middle-America and ’50’s Midwest sensibilities moves steadily into a tale of innocence lost and grief.

Tiny Worlds is an adorable look into a potential world where much is maintained that we never see. Each of the industrious vehicles has a character of it’s own, which is quite the feat given the films 59 second length. More of a showcase than an independent film, I’m hoping they’ll develop this further.

Second in the series of videos for the music of Jon Hopkins is Collide, directed by Tom Haines. Frighteningly aggressive and fitful, the main character forms a disturbing mockery of sexualized dance. Appearing to relive a rave night gone wrong in an abandoned factory, she spasms and contorts in motions resembling the ballet ‘The Rite of Spring’ by Stravinsky, a renowned classical piece in which a young woman dances herself to death. There’s a compulsion here too, she appears to be a prisoner to death, to drink, to fuck, to dance. Is she escaping? Or is she trapped?

It’s a powerful film, seeming to draw influences from Gaspar Noé and Fincher. The song is described by Hopkins as ‘the end of the world’, it’s easy to see apocalyptic tones, the girl, a frantic Nero, dancing in that ruined industrial complex as the world burns.