It’s not often you get to see CGI modelling of this quality done with such a strong conceptual element. In this piece by talented director and artist Robert Mans, we observe an alternate kind of  invasion that places us in a day-in-the-life of a highly-efficient life-seeding robotic organism. The use of imagery in the film of insect-like wings, mandibles and thorns is extremely effective, at times feeling like the trippy sci-fi of The Fountain and other moments smacking of a scary DARPA demonstration video. I wish more mainstream sci-fi films were this inventive and thought-provoking. 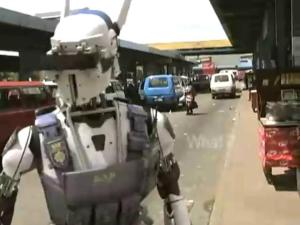 I’ve been keeping a close eye on Neill Blomkamp and I’ve only just found this four year old short made back in 2010. Mimicking a corporate promotional film, it shows the ‘future in law enforcement’ on the streets of a South African city. The flawlessly executed CGI we were wowed by in ‘Distict 9’ (and to a lesser extent in ‘Elysium’) is right here – the future is here, unassuming and integrated. It’s a little terrifying, very political and really cool.

Similar to ‘Alive in Joburg’, it’s also slated for a full-feature length adaptation as Chappie in early 2015.

A live performance, created using projectors and robots (there may also be a human in there somewhere). An interesting exploration on the connection between worlds both digital and real.

BOX from SOUNDSRED on Vimeo.

I’m a sucker for anything mecha, and this is no exception. Sensual robots, milk (for some reason), and making out between said robots. I’m sure there is a deeper sub-text here but… robots!

Why all sci-fi isn’t up to this level, I don’t know. I immediately felt the characters coming through, the interaction appeared effortless.